A Midsummer Day dream: despite the hottest week in many years TomGEM tomatoes and scientists made it to a local market near Valencia

On Saturday, 10th August 2019 the first “Market of the Land” (I mercat de la Terra) was organised in the small town of Mareny de Sant Llorenç near Valencia (Spain) by the farmer association “La Asociacio de Agricultor Ecologics de la Ribera” with Ximo Herrero as leading local representative.  The “market” was to show the good summer vegetables produced in this piece of land just behind the dunes only a few meters from the Mediterranean Sea. But Climate Change made it happen in the second hottest day in more than 30 years. The dunes that protect the plants from the strong winds coming from the sea are not so good in relieving us from the hot temperatures these days reaching over 40 °C. Despite the adverse conditions some of the TomGEM varieties made it and locals were able to taste them including some varieties cultivated by the TomGEM partners CSIC (Agencia Estatal Consejo Superior de Investigaciones Científicas) and Fundación Cajamar Comunidad Valenciana. The event also offered the opportunity to discuss TomGEM objectives and main achievements with the locals and farmers. 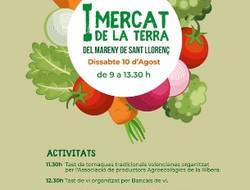 Poster announcing the event. With the participation of IBMC (CSIC) and the collaboration of TomGEM 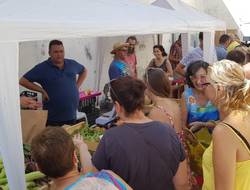 Ximo Herrero at his grocery stand

People tasting tomatoes at the market 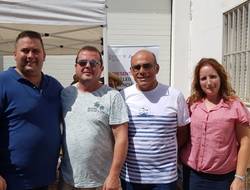 Ximo Herrero as representative of the “Local famer Association” together with Antonio Granell (CSIC, TomGEM) and Salvador and Maria Soler (G2PSOL)